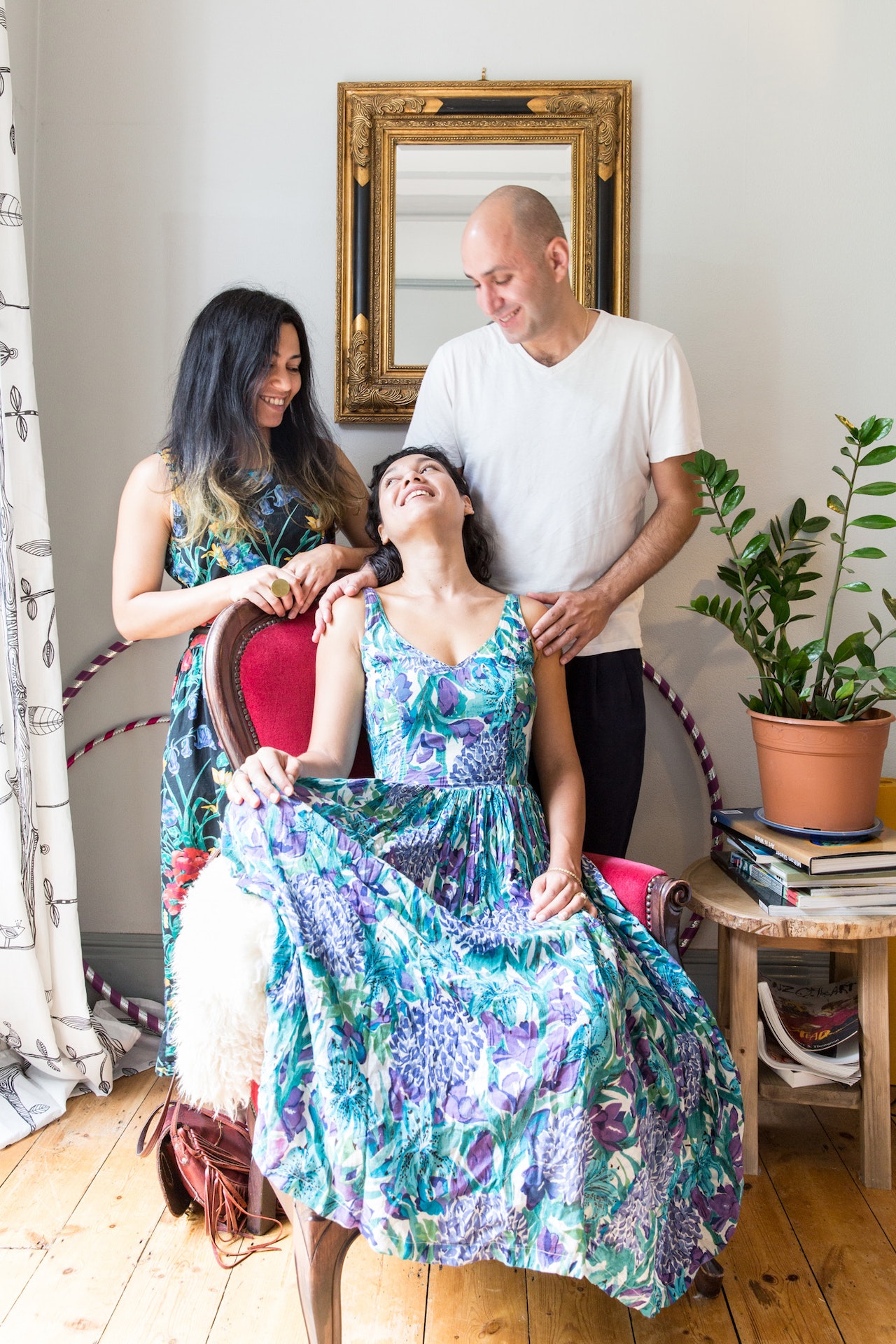 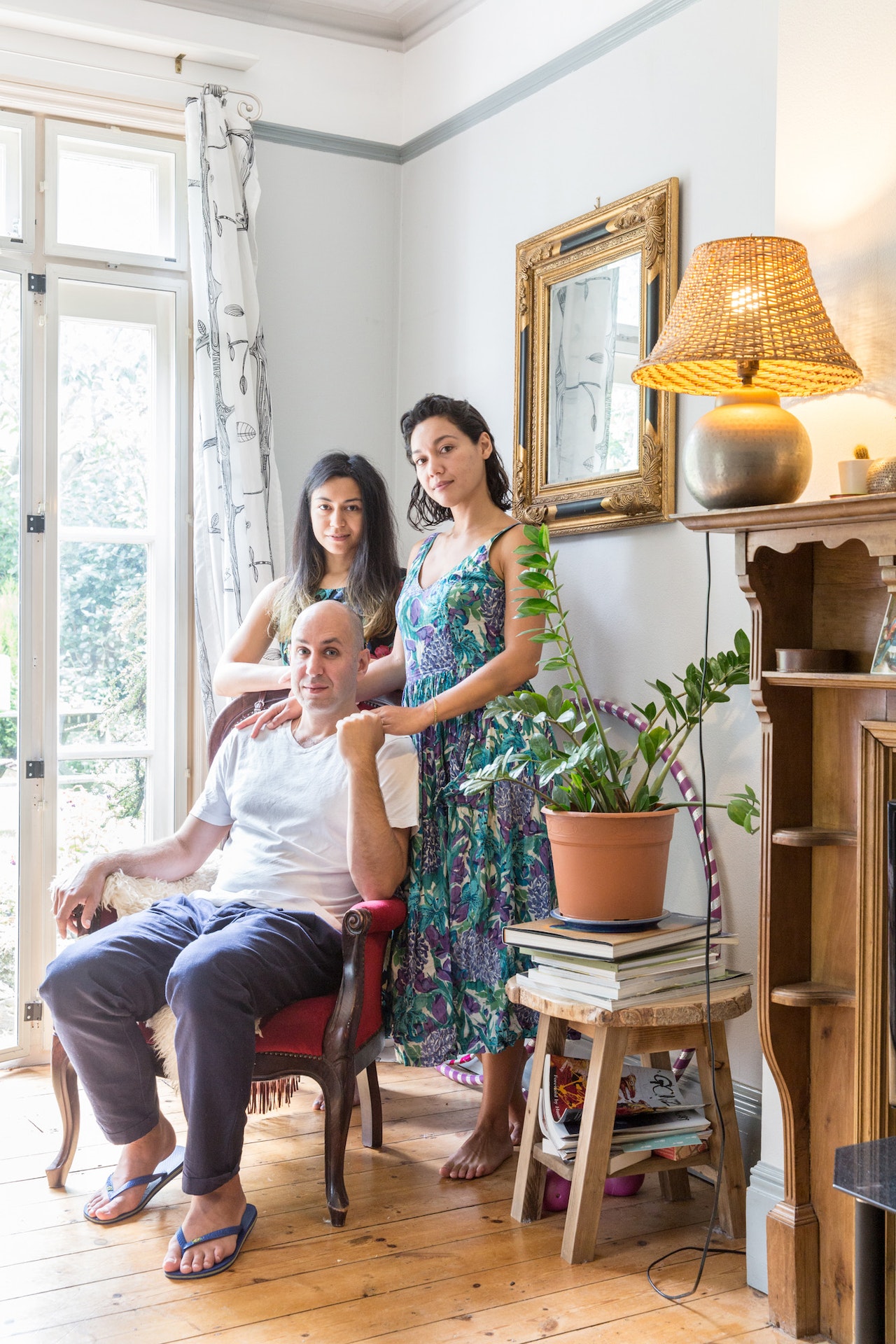 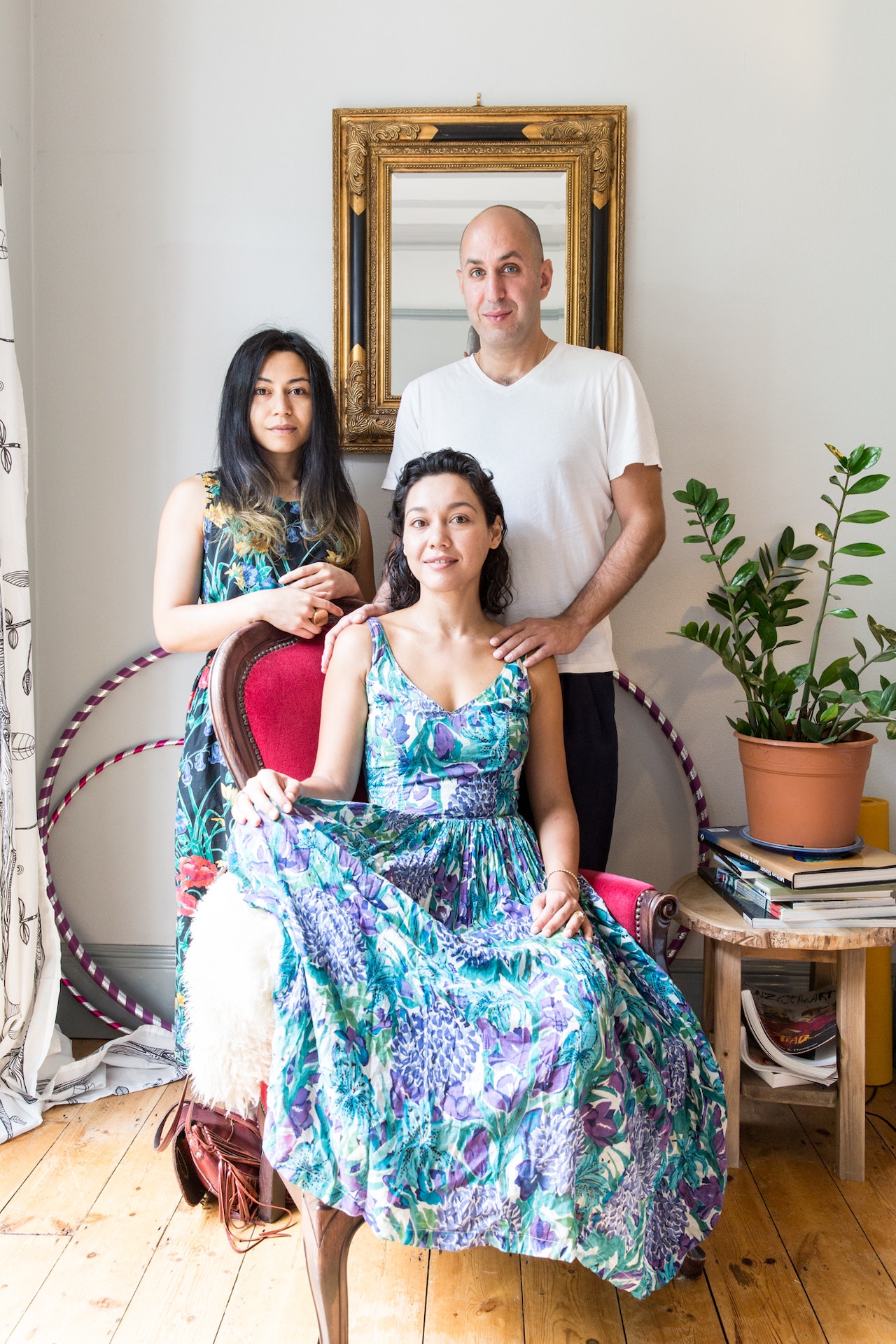 Amal Khalaf sits beside her standing fiancé, Joe Namy and her sister Nadia.

With a Bahraini father and Singaporean mother, Amal Khalaf has ties to both countries. While she was born in Singapore, she lived in Bahrain until she was 17. Prior to coming to London, she studied at university in Leeds before going on to work at the BBC and ITV.

Amal: I was a researcher for documentaries. For ITV, I worked on this awful makeover programme which I quit for ethical reasons, and I then got an amazing internship at this place called ‘Correspondent’ (now ‘This World’), which is an international documentary strand at the BBC. I then had to leave the UK because of my visa, and later returned to study Visual Cultures at Goldsmiths, which I graduated from in 2008.

Having lived in London ever since, Amal is currently a curator at the Serpentine Gallery. She also runs a community-based international residency programme on Edgware Road that brings artists together in the neighbourhood.

Amal’s fiancé Joe Namy – who is an artist and teacher of sound performance – is Lebanese, but was born in the States. He has been living in Beirut for the past five years. As he doesn’t live in the UK, Amal and Joe are deciding where to live so that they can be together.

Joe: We’ve known each other for a while, but it wasn’t until last year that I had a residency here for a few months, which gave us the opportunity to get to know each other.

Nadia: I had been to London quite a lot when I was at university in Lebanon 12 years ago. I then moved to New York, but had to return home because of my visa. The type of work I was doing in New York wasn’t common in Bahrain. I was researching for social sciences, which meant that I ended up working for a public services company. Their main office was based in the UK and I was doing a lot of work at the London office. For this reason, they suggested that I just move here.

While she is enjoying London, Nadia says she misses New York. Her current visa is tied to her job and she must leave in five years.

Amal: When you have an Arab passport, even if it’s from a very wealthy country – which Bahrain is – you have a lot of issues traveling. I always loved the idea of being able to travel so freely. When I came here and went to university, I was surrounded by British people who had been on gap years, whereas I had just been in Bahrain, a small island.

Amal’s current project helps artists who deal with migration in their work to apply for visas. “The topic of migration came about when I realised that there were so many languages being spoken on Edgware Road,” she says. “Every single school that I work in either has 60% asylum seeker children or kids in the school without passports. I remember there was one school where we counted 110 languages being spoken – that’s London in a nutshell.”

Amal: Because I know Edgware Road so well, having worked on my project for so many years, I feel like a Londoner. I love and hate the place, but overall I feel like I am part of it.

Also from Singapore are the Sarathamwinit & Ng. Family.