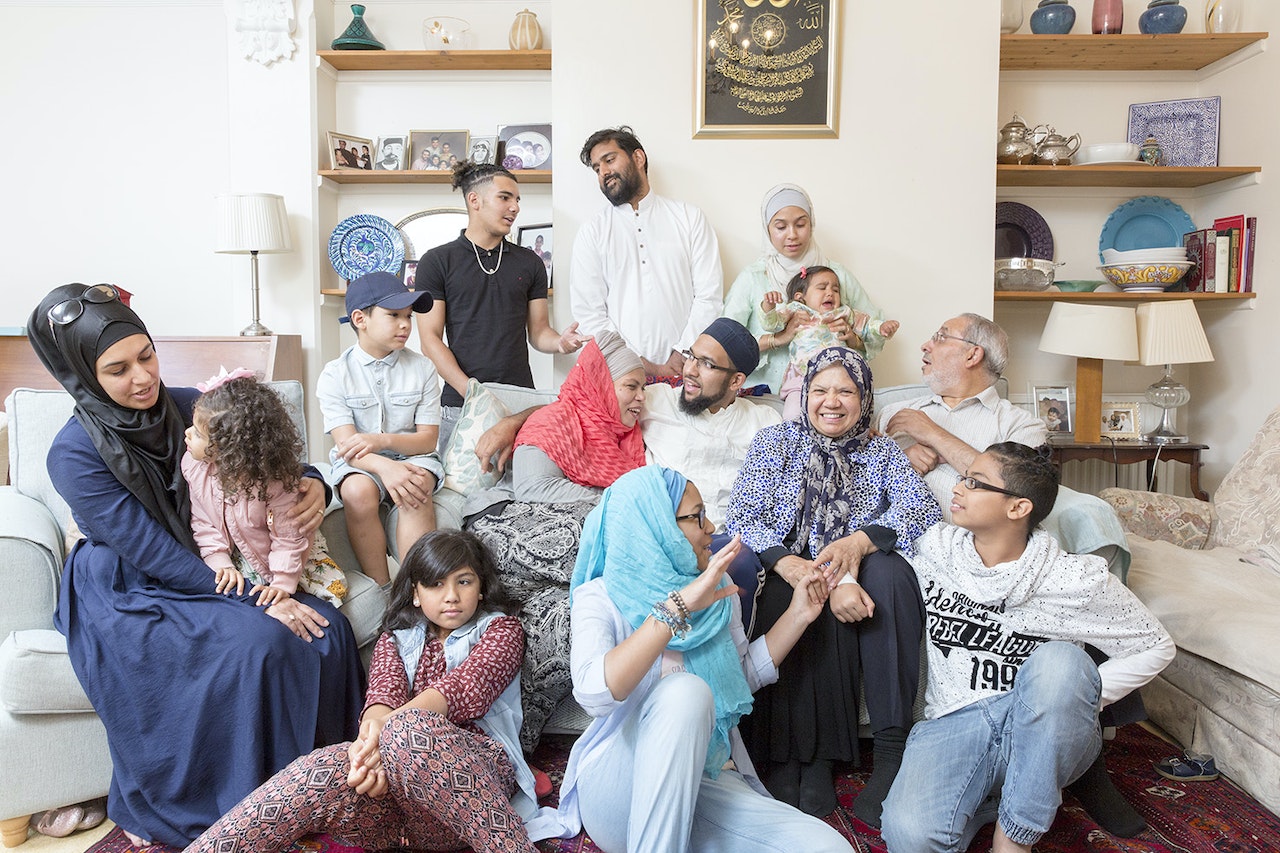 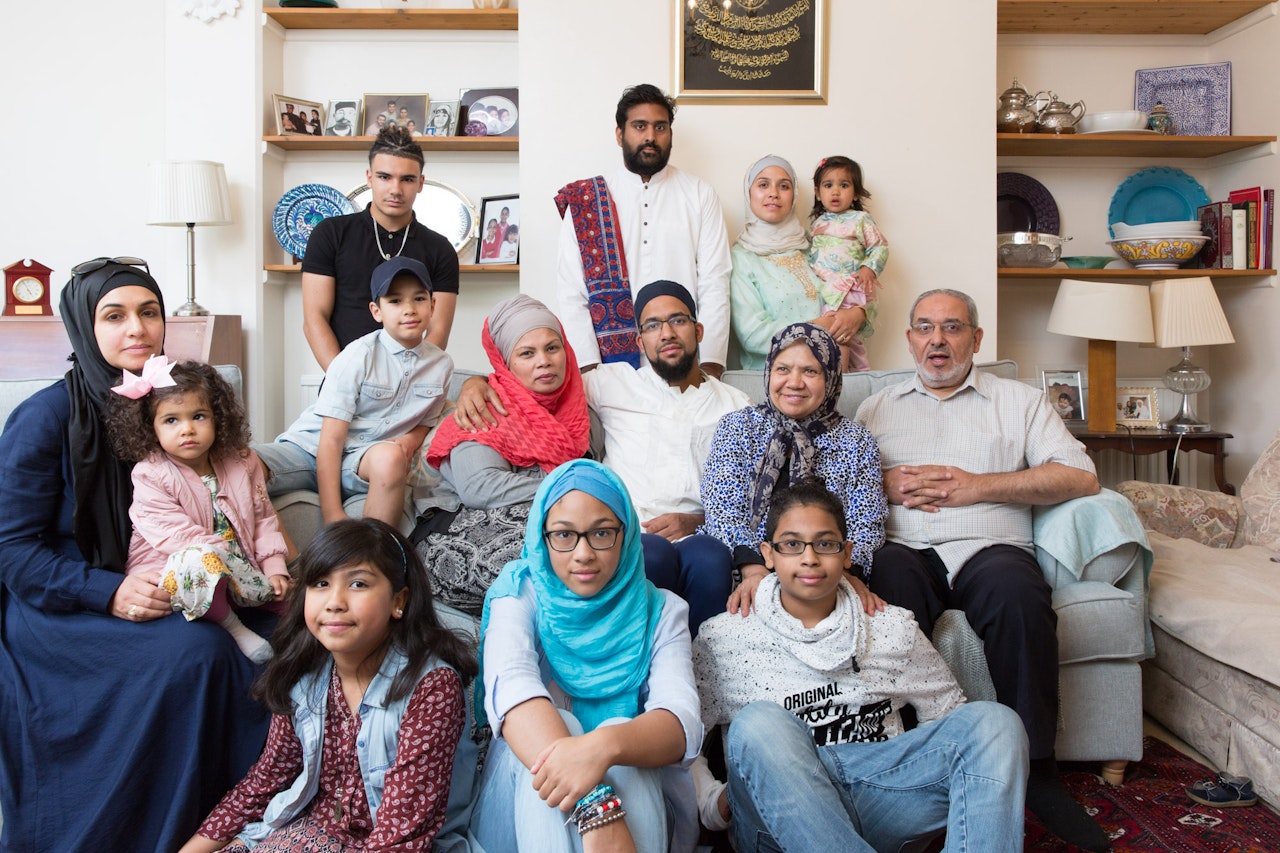 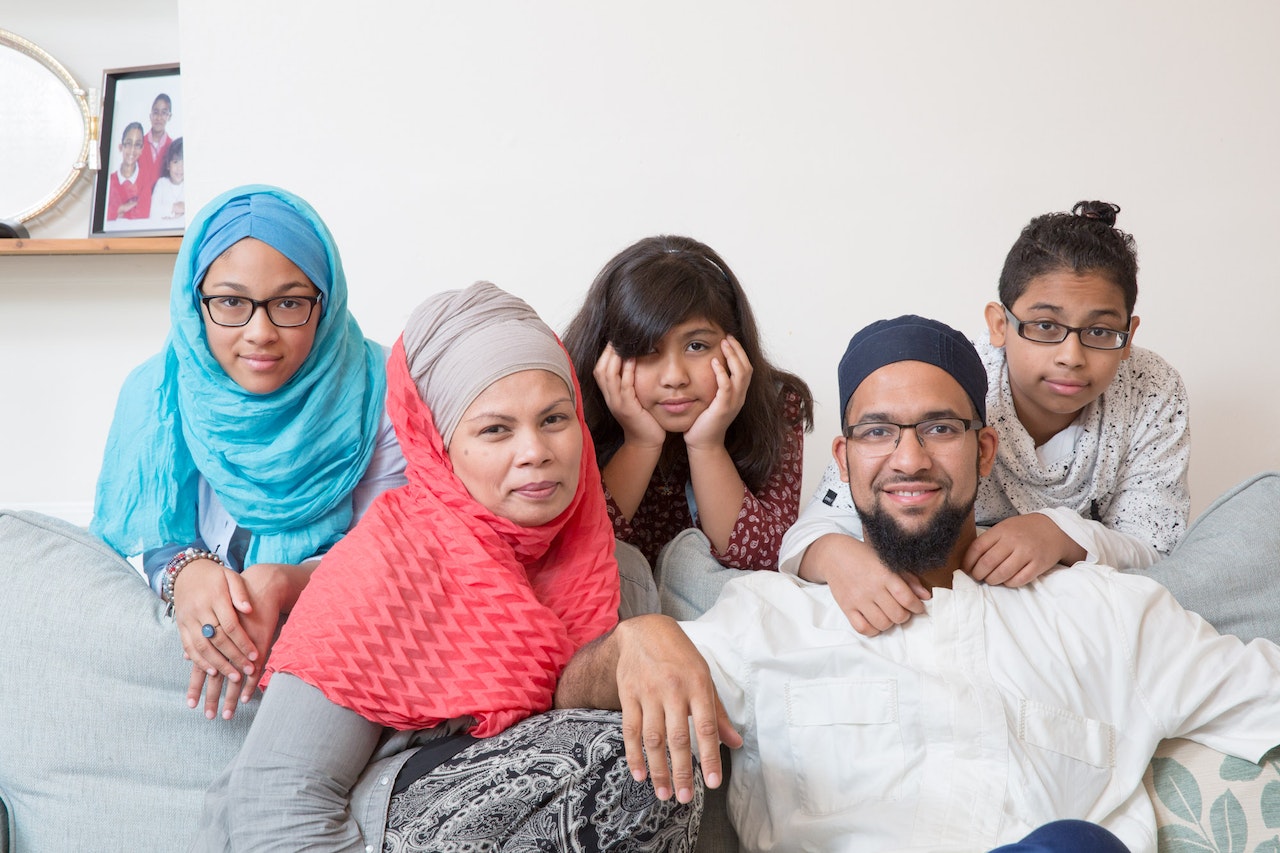 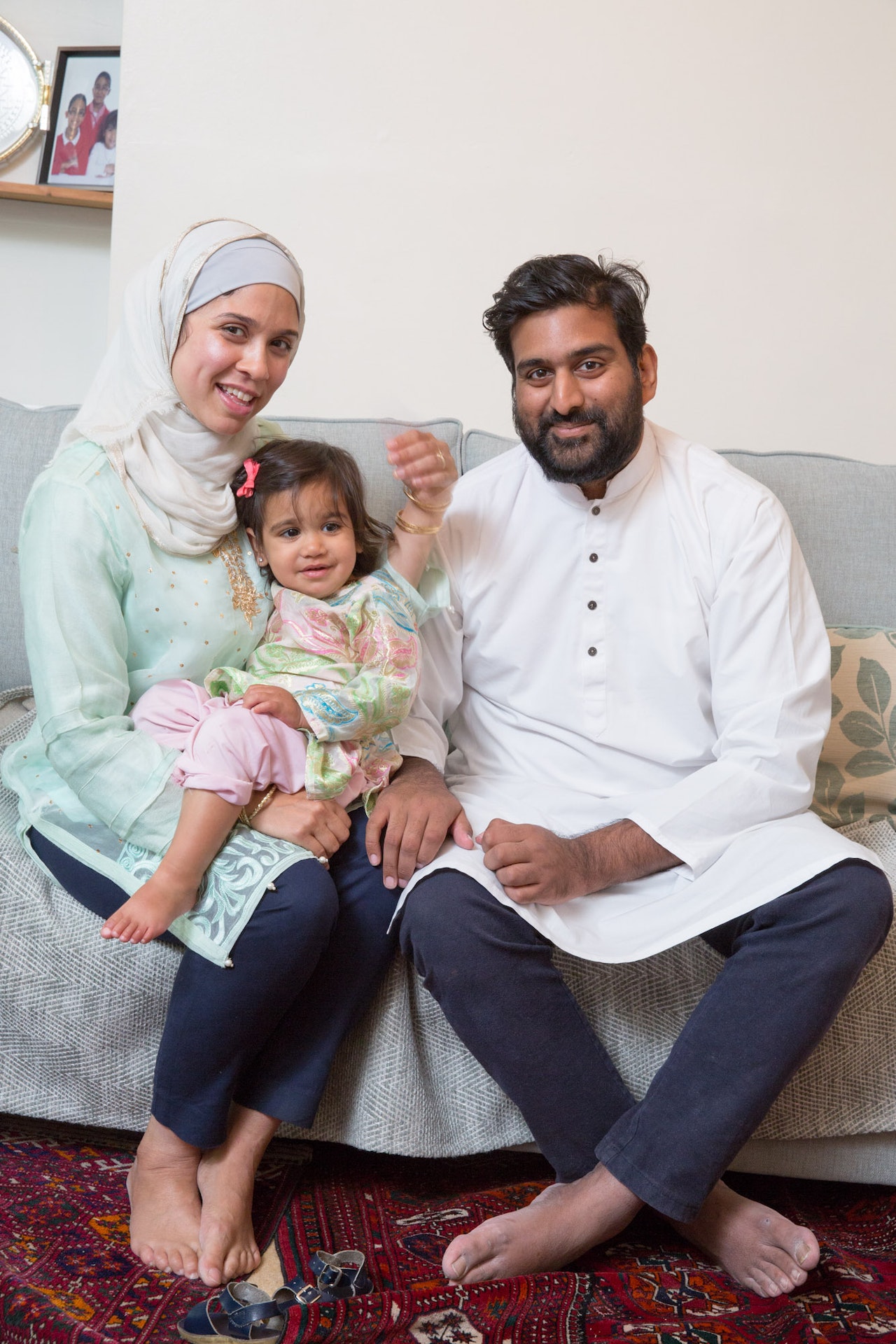 From Libya, Ashur Shamis (sat far right, white shirt) with his wife Shamela (sat left of him in blue) from South Africa. They are surrounded by their family, some of whom are also Pakistani and Turkish-Cypriot.

Shamela Shamis and her husband Ashur came to the UK in the 1960s and 70s to study.

Ashur: I was at Kingston University studying aeronautical engineering and Shamela was at Kingston Hospital doing radiography. We got to know each other through Muslim student group gatherings and it just so happened that we eventually got married.

Ashur, who came to the UK in late October 1965, completed his university studies, but couldn’t return to Libya because of the political situation, so he has remained here ever since.

Shamela: The year we married, Gaddafi released a law that banned Libyans from marrying non-Arabs. I was in that ‘non-Arab’ category, so we were unable to go back.

However, now that they have started a family in London, both Shamela and Ashur consider London home.

Shamela: All my family is in Cape Town; my father died in 1969 but my mother, sister and brother are all in Cape Town. I used to go back more often before we had children, but when my children were young my mum would come here more often. I also couldn’t go back because of apartheid. Now I go back to South Africa every two years. At the start of the revolution, we returned to Libya but now we can no longer go. We were so hopeful in the beginning; it was like a dream.

“We had dreams of taking the boys to Libya in the summer time,” says Shamela, “so that they would pick up Arabic, but it’s not to be. The most important thing is that they have an awareness of their Islamic and Libyan identity.”

As well as Libya, they’ve also been back to South Africa.

Shamela: My second son lives there and is now a resident. He is working on a film about Gaddafi based on my stories and experiences.

Ashur is currently a writer and translator, using the skills he developed while he was working for the Libyan opposition opposing Gaddafi. “We used to go all over the world lobbying against him. When Gaddafi was on the most wanted list we were on INTERPOL together, but we never met,” he says. Ashur was also once on Gaddafi’s most wanted list.

In terms of general attitudes towards Muslims over the last few years, Ashur says: “I have never experienced any animosity, antagonism or bad feelings from anyone. Of course we hear about discrimination, but for us personally, we haven’t had a bad experience.”

Shamela: The area we live in is a very English area. We were considering downsizing, but how could we with our family?! This is our home now.

Other families from South Africa are the Khan Family, the Du Plessis Family, the Sterling Family, the Kuendig Family and the McKenzie Family. Also from Pakistan are the Al-Khaburi Family, the Chaudhry & Ghafoor Family, and the Masoud Family. From Turkey are the Yurt Family, the Yalin Family., and the Ciba Family From both Turkey and Cyrpus are the Noble & Barnett Family.